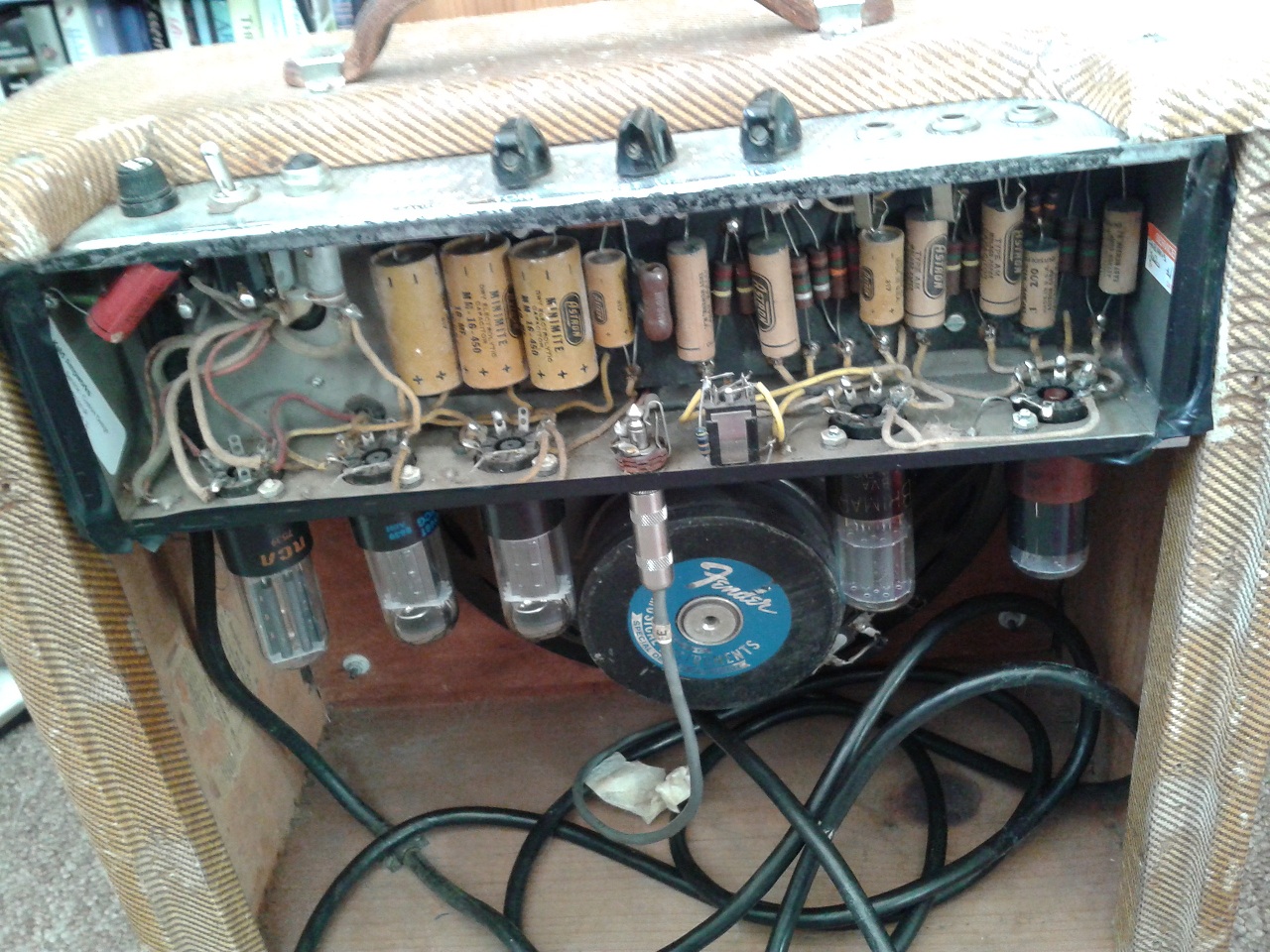 This Vintage Fender tweed repair is the oldest amp I’ve worked on to date. I’m informed it was made in 1953, its a 5C3 design.

The 5C3 deluxe tube complement is 2x 6SC7 for preamp and phase inverter and 2x 6V6 running a push pull output stage to about 12W. The amp uses a valve rectifier – the stock is 5Y3. The customer was running the whole amp run from a nice meaty 240V to 110V transformer from maplins to provide the US mains voltage.

The customer brought the amp in as not working and requested an HT capacitor refit.

I noticed that the HT voltage gets to 500V at inrush before dropping to below 450V (the rating of the existing caps). Since the amp doesn’t have a standby switch this means that the caps are subject to significant stress at turn on. I experimented with a 5V4 rectifier valve to reduce the inrush current, however the 5V4 results in a higher HT with not much headroom before the 450V rating. I recommended 600V caps for the repair to allow for a good safety margin.

600V 15u/16u caps aren’t that common in these days of low voltage electronics – unfortunate for those attempting a vintage fender tweed repair! So we used 350V electro caps in pairs. This didn’t look as pretty, but functionally provides the same performance. I never recommend NOS electrolytic capacitors as electrolytic capacitors degrade even when out of circuit.

I removed the low value bleed capacitor on the primary side of the mains transformer as this is considered unsafe by today’s standards. If the cap becomes faulty and passes DC then the amplifier chassis can become live. Unlikely, but not nice! I always insist upon following mains safety procedures – even on vintage amplifiers.

The fault with the amplifier was actually a loose ground connection underneath the eyelet board – simply fixed.

One last problem – these 6SC7 valves in this particular period of vintage fender amps have a horrible tendency to be microphonic. The speaker vibrates the cabinet, the cabinet shakes the rather old valve base, which shakes the valve and the whole thing takes off in LF feedback. There’s a probably a reason Fender dropped them after this model! I first assumed that the fault was with a worn out valve but on ordering a replacement I now believe that this is likely to be a feature of all 6SC7s. The solution I found was to replace the valve base with a more mechanically rigid Belton one, to stop the valve moving in its base. Interested to hear from anyone else who’s experienced this!