Here’s a simple guide to biasing for guitarists. Biasing sets the amount of current running through a valve when there’s no signal. 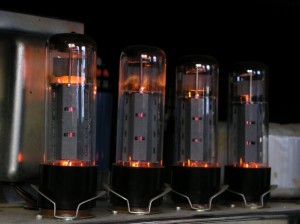 No. Here are 2 exceptions.

OK, so can I do my own valve amp bias?

Some manufacturers (eg. some modern marshalls) provide a bias port on the back of the amp. If you know how to use a multimeter you can place one across these pins and adjust the preset potentiometers to give the correct reading (given by manufacturer). The values change from amplifier to amplifier.

If your amp doesn’t have external bias pots then I would strongly recommend against doing your own biasing. Valve amp bias must be done on a live amp – operating on a live valve amp is extremely dangerous if you don’t know what you’re doing. The voltages (often 300-700VDC) and currents involved can kill you easily. Take the amp to a tech. 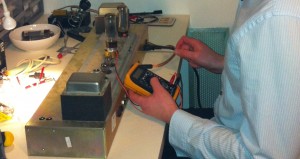 I’ve got a fixed bias amp, but I put new valves in and turned the amp on. It sounds fine, is it?

Many people have their own ways of biasing an amp. I’ve heard of people turning the valves up till they ‘red plate’ and then just backing off a bit. Some users adjust only by ear. I would recommend against these techniques and advocate either biasing to a value specified in manufacturers guidelines or to a value calculated to give sensible dissipation in the power tubes. Biasing by ear or sight (or smell!!) could reduce valve life or damage your amp.

My amp needs biasing and I don’t like maths!

Please get in touch, the cost of valve amp bias is £37 and includes testing of all valves on a valve tester.