Most of the valve testing that I do is as a routine part of the service and repair of valve amps. There is NO CHARGE for the testing of valves as a part of a repair and valve testing is included in every valve amp service. However I’m approached from time to time by people who just want valves testing either to sell or for peace of mind. For this, I charge £3/valve, with a minimum of 4 valves (or £12). For quantity valve testing requirements I’m happy to negotiate a reduced rate.

If you’re bringing me a repair and you have a couple of old valves you’d like me to test then no worries, that’s FOC and I can use them for the repair if they’re still good. If you’ve got a whole box, I may charge though! 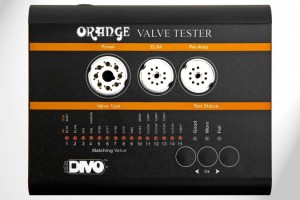 I do most of my valve testing with an Orange VT1000 valve tester. There are more advanced valve testers around, and I’ve used traditional units by Avo in the past but this does exactly what I need at Ampworks. It tells me if the valve works and whether it’s suitable for the customer’s amp. This is a digitally controlled basic valve tester that gives a pass/worn/fail result as well as a matching value to allow the grouping of power valves into matched pairs or matched quads (or matched duodecads like this mesa boogie bass 400+ repair!). If you’re testing a dual triode then it gives a matching value for each triode, allowing you to determine if a valve is suitable for phase inverter duties.

Upon which it performs the following valve tests:

The above tester does nearly all the valves that are commonly available on valve amps from the late 1950s onwards. I also do a ‘basic’ test that checks basic function but cannot guarantee valve performance.

I’ve done these basic tests on: