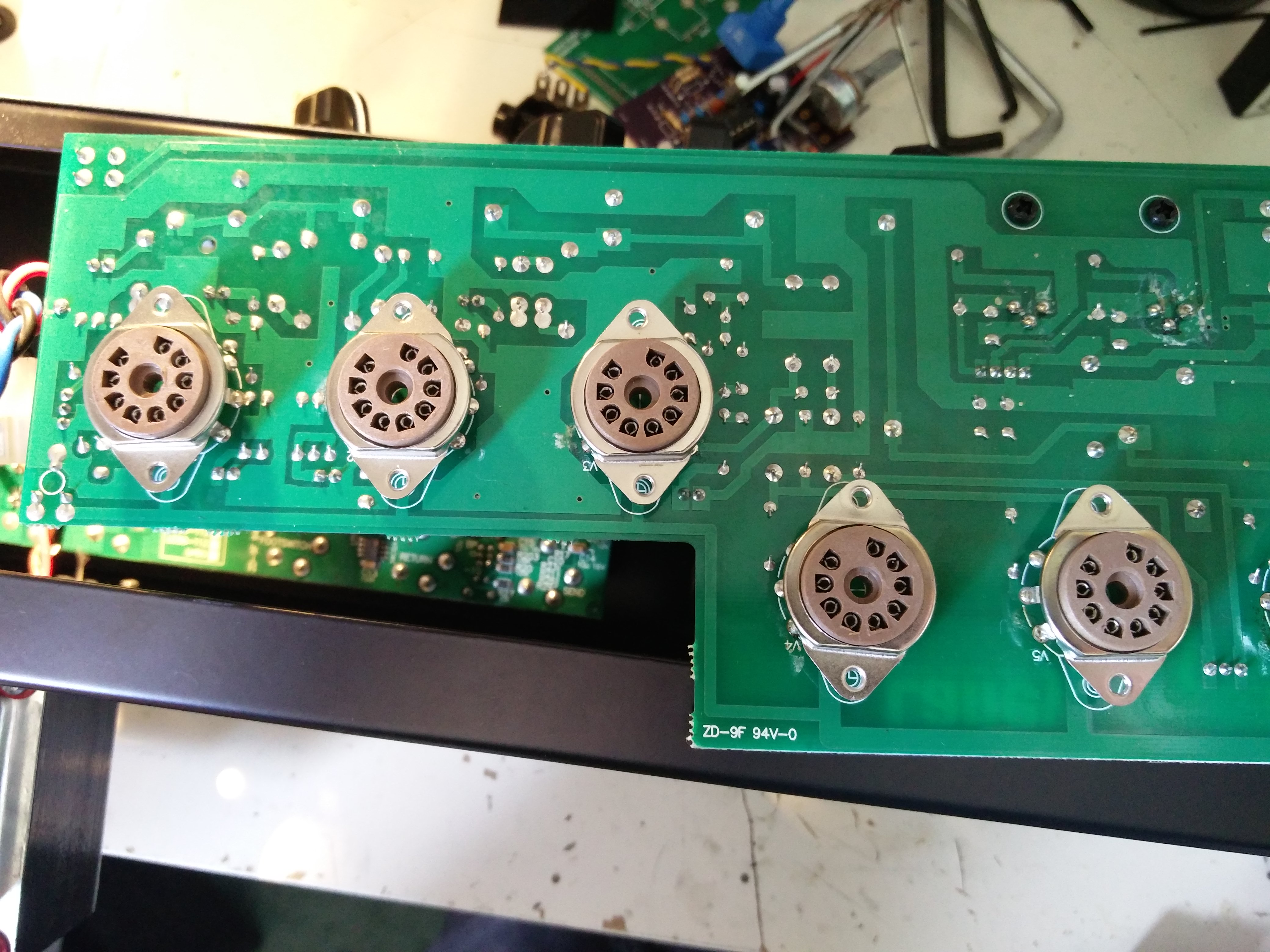 My customer brought this Laney VC30 from Worksop to my Newark workshop complaining that the clean channel distorted. It’s a pity, because he’d kept it in pristine condition!

Two other attempts had been made at repairing this fault. One by Laney themselves, and one by a local electronic engineer. Both had fixed the problem temporarily but it had re-appeared. Upon testing, the clean channel was very weak and distorted.

For this reason I took a different tack. At least one of the previous repairs had simply been replacing V1. This is a logical choice since V1A deals with the clean channel, but the valve tested as working and I suspected that the clean channel distorting problem was probably with an invisible dry joint in the valve socket. I reflowed all the joints on the socket and the problem dis-appeared. Of course I’ve guaranteed my work and in the unlikely event that the problem re-appears again I’ll take the amp straight back in.

I also noticed that the output valves were very poorly matched. This wasn’t causing the problem clean channel distorted problem, but it was worth rectifying to alleviate future issues.

I noticed some interesting design changes in the VC30 – compared to other Laney VC amps that I’ve repaired. Most interestingly, Laney have swapped their traditional spring reverb for a digital reverb based around the SPIN ASM reverb chip that they’ve used in other recent ranges, such as the Cub.

If you have a Laney VC30 or a clean channel distorted repair, please get in touch. 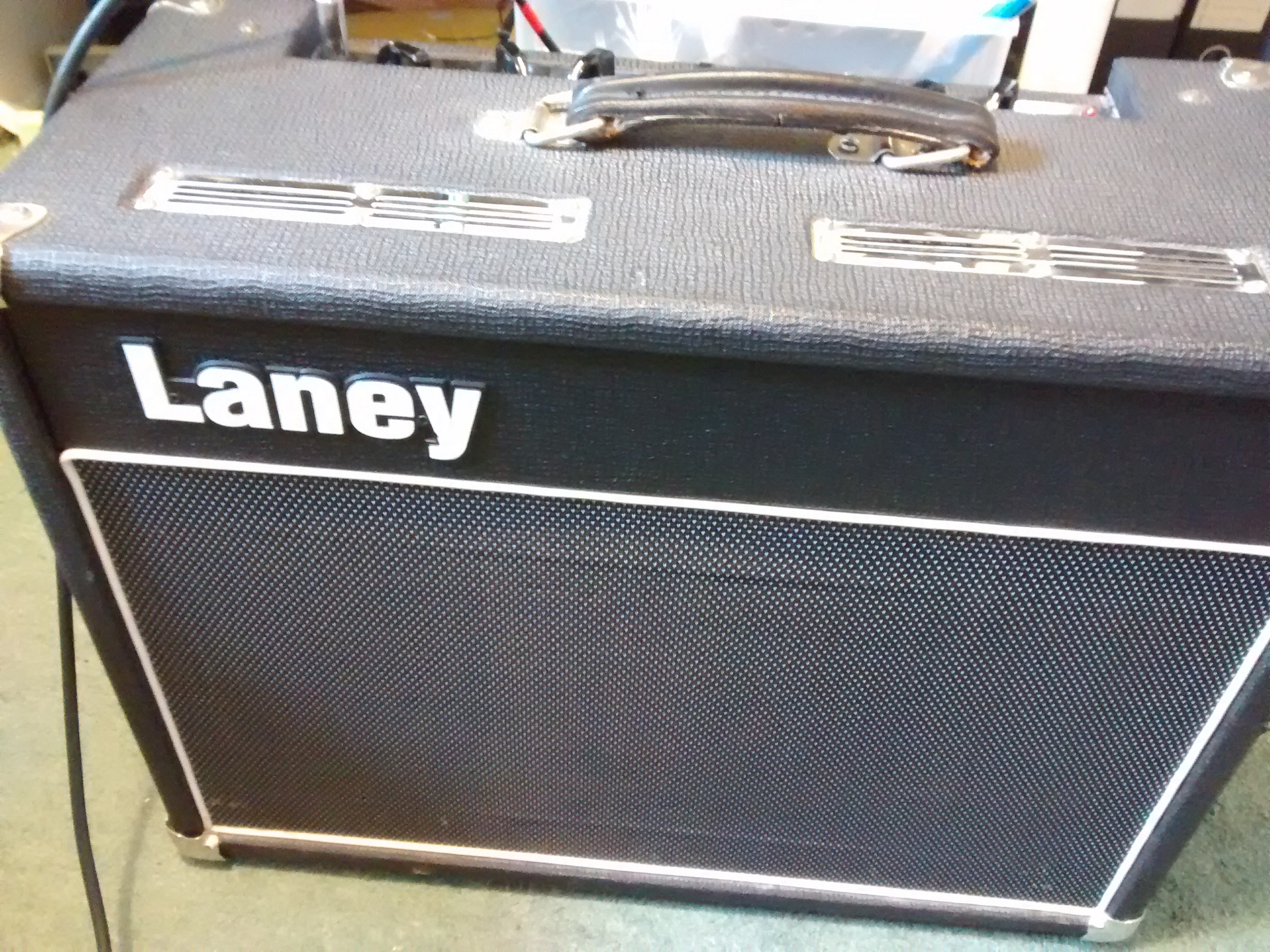 This Laney speaker change job came down from York last week. The Laney VC30s are great amps but sadly are supplied with quite bland speakers. My customer asked me to fit a Celestion V30 to replace the stock HH driver.

It’s owned by a professional guitarist who bought it as a spare – unfortunately the amp also had a bad case of ‘snap, crackle and pop’ so whilst en route to gig he brought it to me for investigation and a speaker change.

The speaker change was a success. Because I’ve had experience of microphonic howls in Laney amps, I was initially concerned about the V30’s greater magnet size and proximity to the valves, but this turned out to work well. You can hear the results of the speaker change below, a great improvement!

In another Laney speaker change, I had good results with an Eminence Legend, I’m afraid the audio isn’t as good on this one!

The crackling issue turned out to be the phase inverter valve, one if two 12AX7s which failed in my valve tester.

If you have a Laney VC30 speaker change or repair, drop me a message and we’ll bring your amp to life! 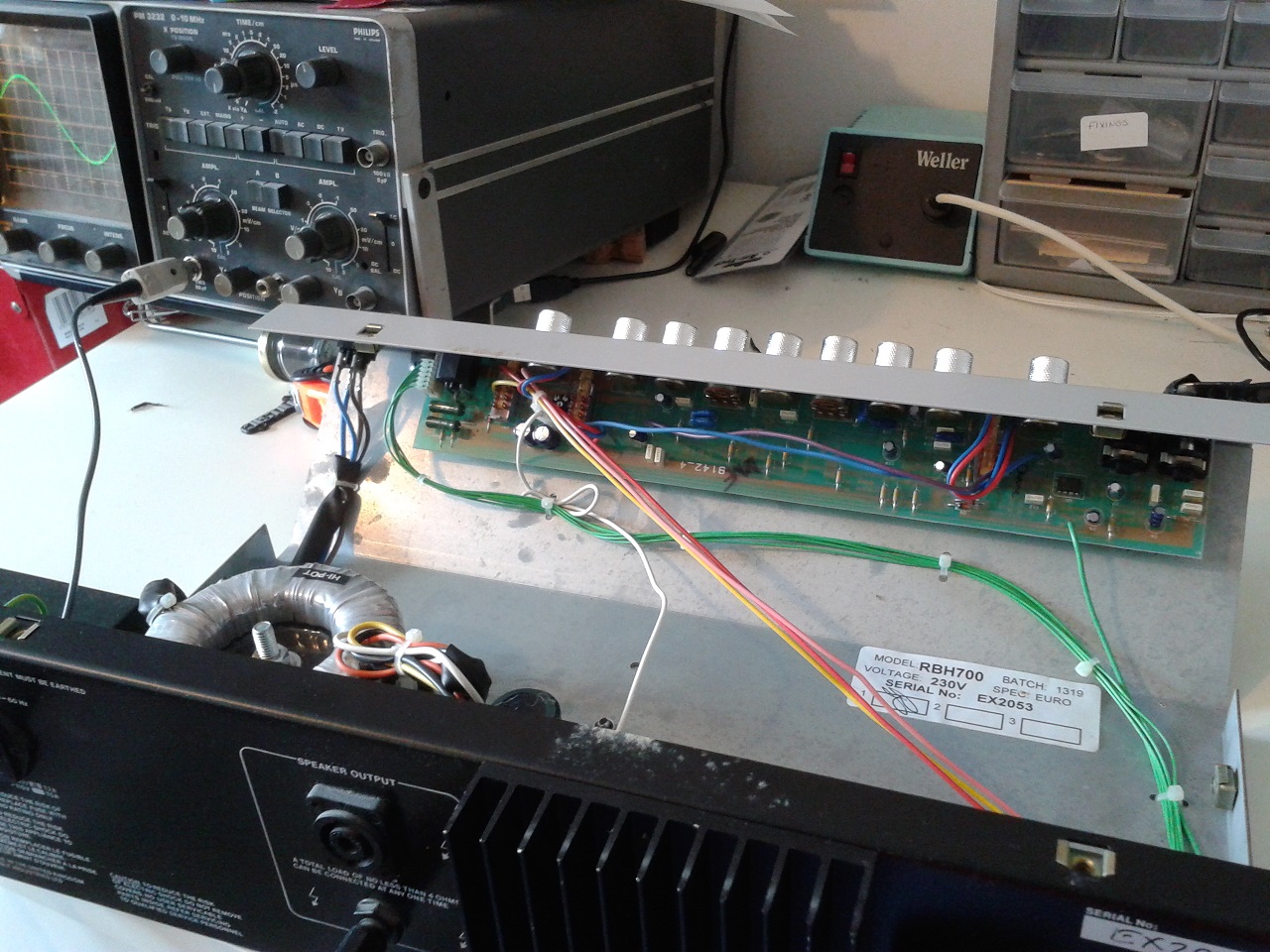 This Laney Repair was an RBX700 with an annoying intermittent problem that I was at first unable to replicate. The customer descibed the fault as a volume drop-out after about 10m or so of playing. On the bench at the repair shop it worked for several hours on several occasions without any issues.

When I have an intermittent fault to fix, I first of all inspect all solder joints in the amp with a magnifying glass. Then I run a high RMS signal to heat up the amplifier and attempt to dislodge any power supply or output stage joints that may be affected by heat. I’ll then use insulated tweezers to ‘poke’ likely culprits inside the amp and in PCB amps like this Laney I’ll flex the circuit board by hand. I don’t recommend anybody does any of this to a live amp unless they really know what they’re doing.

Anyway, all to no effect in this amp!

The repair issue turned out to be the FX loop jacks known as the the ‘dreaded switching jack problem’ that I’ve heard about, mostly from non-UK repairers who deal with amps in more humid conditions. The FX loop jacks in most amps are in circuit all the time, they utilise back contact switching to pass signal through when no cables are plugged in. In this Laney, the FX loop jack contacts had oxidised and a layer of insulation built up to cause the described symptoms.

The customer sensibly said ‘but I don’t use the FX loop!’ but this issue is actually compounded by lack of use – in the other jacks on his amp, eg the input jack, any oxidation would have been rubbed off by constant use.

I like these Laney RBX amps – they make a great sound and don’t cost too much.

If you have a Laney repair, please get in touch.

What is it with laney amps that makes me forget to photo them?

This Laney amp bias GH100L just needed its bias adjusting to accommodate a new set of EL34s. The GH100L is a fixed bias amp, which means the bias is adjusted (and quiescent current is fixed) by a technician. The opposite of fixed valve bias is cathode valve bias. Confusingly cathode bias is not usually adjustable. For more info, check out this article

If you have a laney repair or a valve amp bias job, please get in touch.