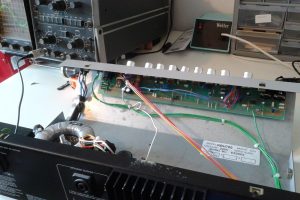 This Laney Repair was an RBX700 with an annoying intermittent problem that I was at first unable to replicate. The customer descibed the fault as a volume drop-out after about 10m or so of playing. On the bench at the repair shop it worked for several hours on several occasions without any issues.

When I have an intermittent fault to fix, I first of all inspect all solder joints in the amp with a magnifying glass. Then I run a high RMS signal to heat up the amplifier and attempt to dislodge any power supply or output stage joints that may be affected by heat. I’ll then use insulated tweezers to ‘poke’ likely culprits inside the amp and in PCB amps like this Laney I’ll flex the circuit board by hand. I don’t recommend anybody does any of this to a live amp unless they really know what they’re doing.

Anyway, all to no effect in this amp!

The repair issue turned out to be the FX loop jacks known as the the ‘dreaded switching jack problem’ that I’ve heard about, mostly from non-UK repairers who deal with amps in more humid conditions. The FX loop jacks in most amps are in circuit all the time, they utilise back contact switching to pass signal through when no cables are plugged in. In this Laney, the FX loop jack contacts had oxidised and a layer of insulation built up to cause the described symptoms.

The customer sensibly said ‘but I don’t use the FX loop!’ but this issue is actually compounded by lack of use – in the other jacks on his amp, eg the input jack, any oxidation would have been rubbed off by constant use.

I like these Laney RBX amps – they make a great sound and don’t cost too much.

If you have a Laney repair, please get in touch.

Nick Laidlaw
2018-06-17T19:41:31+0000
Absolutely brilliant service. Had no idea how to fix my Hughes and Kettner Tubemeister. Sent it away. Kept me up to... date with repairs and even sent me a video to show me performance once the repair was complete. Works better than ever couldn't be happier! All at a very fair price too! Highly recommend!!read more
Next Reviews