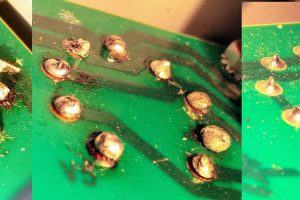 This Fender Blues Jnr repair was another urgent job completed quickly for a customer who needed it for a gig in Lincoln on the evening it was dropped off.

He brought it to me reporting that something ‘wasn’t right’ with the sound. Upon listening to the amp I could tell what he meant – under certain notes there was an odd ‘subharmonic’ type sound, ghost notes appearing underneath the played notes.

I’ve done other Fender Blues Jnr repair work in the past – but unfortunately someone else had already been working on this amp. They’d make a bit of a mess of the power amp

Unfortunately the previous attempt at repair, though well meant, caused problems – you can see in the first two images there are lifted pads (possibly the original problem or caused by excessive heat when soldering), no solder between pin and pad on the cathode and some burning on the PCB through excess heat (this is actually on pin 3 of the EL84 which isn’t used so not a big issue). 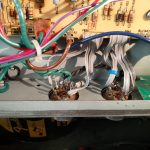 The third image is how it should look – Fender’s original soldering on the preamp valves is intact. The preamp valves have the screws closer, they’re shorter so there’s less force exerted and they’re not near the place where you’d put the mains cable.

The power valve section of the PCB was beyond sensible repair and the best way to proceed was to take out the PCB, and saw it in half, re-fit the preamp part of the PCB and wire the power stage point to point. I used chassis mount valve sockets to prevent this happening to the power stage in the future. 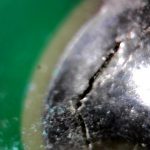 There were also some hairline cracks observed under the microscope which I resoldered.
Having fixed these sources of issues I was finally able to address the problem with the ghost notes. This is caused by a common problem with modern fenders – lousy filter capacitors. I was able to replace the filter caps with parts that I had in stock in order to meet the 24h deadline.

The ghost notes were visible on the oscilloscope – and so it was easy to see on the bench when these horrible sounds disappeared. You can also hear the difference in the video:

If you need a Fender BLues Jnr Repair, please get in touch. 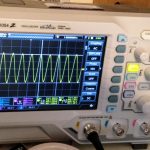 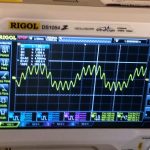 Roger Jepson
2018-06-03T20:46:12+0000
A quick and neat repair to my amp. Very easy to contact Rowan who explained things clearly and kept me informed... throughout.. The cost was very reasonable and I would certainly take other repairs to him.read more

Phil Hughes
2018-06-02T07:47:58+0000
Took my EBS 360 head to Rowan for repair and he sorted it while I waited as I needed it for a gig. His depth of... knowledge and thorough approach was impressive. If you have a problem with your gear I would recommend talking to Rowan at Keld Ampworksread more
Next Reviews